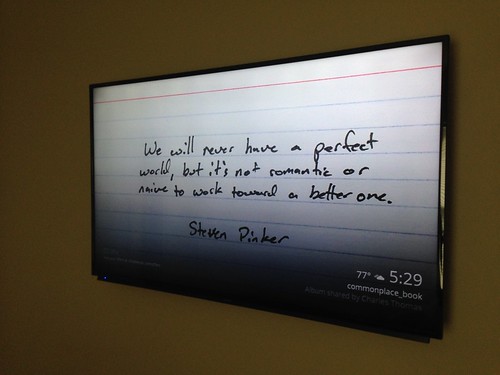 I took Ryan’s suggestion of using index cards for the project, and it’s great! In fact, it’s sparked a resurgence of using real paper for several things. I think I’ll probably blog about that, too, at some point. Like I said, I’ve been doing this a long time and didn’t realize it. What I was doing is clipping quotes and articles and things into Evernote. That was all well and good, but what I found is that unless I was actually searching for it in Evernote, which never happened, I’d save something there and then never see it again. Evernote is great at supplementing my long term memory, but not good at keeping things at the forefront of my mind. Evernote is deep storage, like a photo album. What I wanted was something more in my face, like a framed photo on my desk.

When I thought of that analogy, I immediately knew what the solution to this problem was (or so I thought … foreshadowing): a digital photo frame. I would write these all by hand  – which also helps with memory retention — and then I’d scan them all and put the scans on a digital photo frame. Since I was using 3×5″ index cards, I tried to find a 3×5″ digital photo frame. Which is basically impossible. But I did find a pretty cheap 3×5″ touch screen designed to attach to a Raspberry Pi. I had one of those lying around, so I bought the screen. Turns out that the RPi I have is so old that it isn’t compatible with the screen I ordered. So I returned that, and found a bigger picture frame that was the same price. The photo frame was perfect! … Except that about half the scans wouldn’t display and I couldn’t figure out why. That got sent back to Amazon, too.

The room in my house that I use as my office has an outlet on the wall that’s WAY higher than normal power outlet height. Since I toured the house I knew I’d use that room as my office, and I’d mount a TV in that spot. As I was trying to figure out what my next step would be with the commonplace book project, I was also farting around with my monitor setup. Shortly after I moved back to MI, I bought a couple monitors to plug into my laptop. After a while of using both of them, I realized that the extra monitor wasn’t really doing anything other than distracting me from whatever I was trying to focus on. That extra monitor made it into my pile of unused, poorly purchased electronic equipment, along with a Chromecast that was part of another failed experiment I also hope to blog about some time soon.

Then I had a eureka moment. I plugged the Chromecast into the monitor, and started reading about how to change the Chromecast’s default slide show. It turns out Google went out of their way to make this a painful experience. Google has multiple services to which you can upload photos, but the only one that works with the Chromecast screen saver slide show is Google Plus. So I logged into my Google Plus account, blew the dust off it, and uploaded all my commonplace book scans to it. The Chromecast can now rotate through my commonplace book scans whenever I’m not throwing something else (usually YouTube) onto it. Recently, I finished that part of the project by finally putting a TV on that wall with the raised outlet, after finding a pretty good deal. Now the Chromecast is plugged into that.

Since I already had the scans, I threw them into a public folder in my Dropbox, and hacked together a quick script to generate a page on this site to display the entries. I found that I was referencing some of the entries in conversations, and I wanted to be able to share them quickly. That seemed like a good (and free) way to do it. Unfortunately, trying to load that page was SUPER slow, I’m assuming b/c it was opening too many connections to Dropbox’s public sharing servers, which are probably both overworked and throttled, since that’s a free service and I was basically abusing it. So instead, I’ve started uploading them to a new Tumblr page I created specifically for this project. I didn’t want to go through the hassle of uploading each of the 70-odd scans I’d accumulated at this point one by one, so I moved them out of the public folder in Dropbox, and then created a new IFTTT recipe, which automatically posts to that Tumblr page any images that get dropped in the right folder in Dropbox.

But then I hit another snag. About half the scans didn’t upload automatically. At first I assumed that this was a problem with trying to push too many to Tumblr at once, so I removed all the ones that didn’t work and started adding them back in a few at a time. Pretty quickly I realized that wasn’t the problem, but couldn’t figure out for the life of me why it wasn’t working. I won’t go into any more technical details, but it turns out that the problem is my scanner. It creates JPEGs, but in what I now assume is a non-standard — or at least less-standard — format. I found a command line tool in OSX to reformat the images, and then I was able to upload them successfully. I now suspect that that was the problem with the digital photo frame, but since I only paid like $35 for the thing, I figured it was just broken b/c it was so cheap. I guess it’s a good thing I didn’t solve the problem sooner, though, or I may not have come up with the idea of sharing my commonplace book publicly.